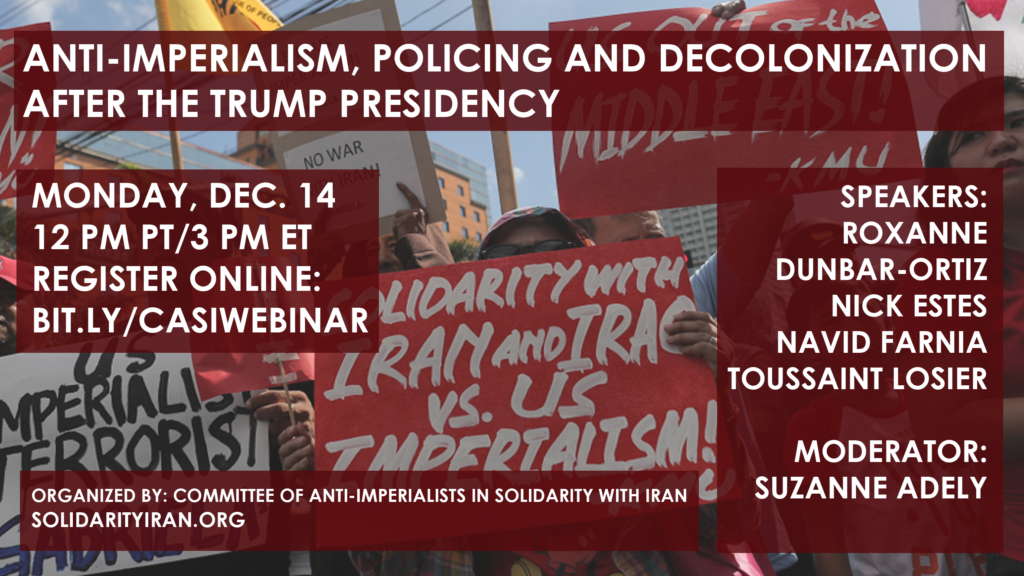 President-Elect Joe Biden announced as early as November 24, just three weeks after the election, that one of his greatest priorities as the new president will be to restore the United States to its rightful place as an international leader.  This is of course a euphemism for the restoration of U.S. imperialism, and Biden’s cabinet nominees reflect such aspirations.  Biden’s pick for Director of National Intelligence, Avril Haines, has been complicit in the CIA’s use of torture and drone warfare, while Biden’s nominee for ambassador to the United Nations, Linda Thomas-Greenfield, stated in her lauded speech on November 24 that “America is back.”

But it is the nomination of Tony Blinken as Secretary of State that is the most telling. Blinken once called for the partition of Iraq, and has advocated for the bombing of Syria and Libya, reflecting an embrace of chaos and destruction as the backbones of U.S. foreign policy in the Arab region.  Now Blinken’s got his eye on China.  Recently, Blinken announced that the U.S. should prioritize its “relations” with China.

“China poses a growing challenge, arguably the biggest challenge, we face from another nation state: economically, technologically, militarily, even diplomatically…. So I think the question we have to ask ourselves is, ‘What is the most effective strategy to protect and advance our security, our prosperity, our values when it comes to engaging with China?’ And I think the Vice President would tell you that we have to start by putting ourselves in a position of strength from which to engage China so that the relationship moves forward more on our terms than on theirs.”

There is no question that U.S. imperialism will soon experience a resurgence.  But anti-imperialist movements throughout the world have also entered a new phase of resistance and even victory.  The success of the Bolivian people against the U.S. sponsored coup and the return of Evo Morales to Bolivia is one of the greatest anti-imperialist victories in recent memory, and is sure to usher in more anti-imperialist triumphs.  In the face of a multilateral geopolitical landscape, a weakened U.S. economy and divided ruling class, and a new wave of anti-imperialist resistance, how much longer can U.S. imperialism survive?

Please join the Committee for Anti-Imperialists in Solidarity with Iran as we end our workshop series on U.S. imperialism.  Panelists will discuss the future of U.S. imperialism and global repression under the incoming Biden administration.  Specific topics of discussion include recent assassinations of Iranian government officials and coup attempts in Venezuela, the role of AFRICOM in expanding U.S. imperial power, the demise of liberalism and the rise of fascism as it effects U.S. imperial policy, and links between domestic policing and militarism abroad.  This discussion will be undergirded by an analysis of U.S. continental imperialism as the process of racial capitalist accumulation that allowed the U.S. to launch overseas imperialism, presented by Roxanne Dunbar Ortiz.

And stay tuned for our next workshop series, which will focus on Iran and the Arab region.  Our first workshop in this series, scheduled for January, is entitled “U.S.-Iran Relations in the Biden Era: What’s Next?”, and includes Richard Falk, Sasan Fayazmanesh, Vira Ameli and others.  And in March, we will host “Iran and Palestine: A History of Joint Struggle.”