The Time for Anti-Imperialism is Now 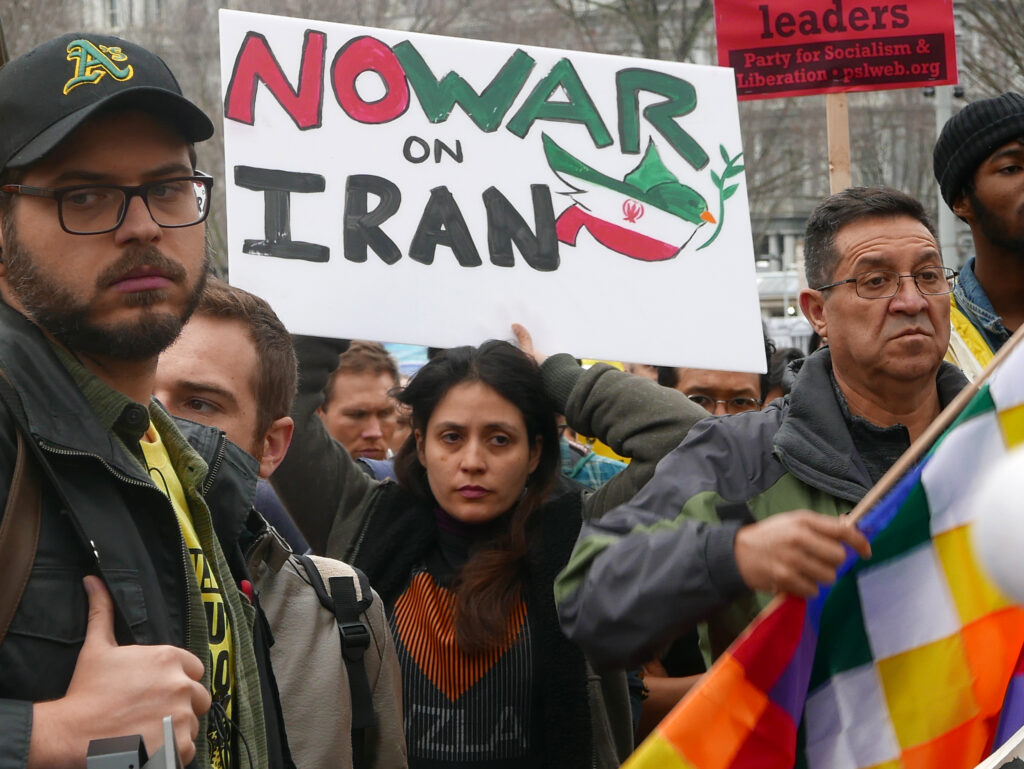 The Time for Anti-Imperialism is Now

After World War II, dozens of nations throughout Africa, Asia and Latin America broke free from the shackles of colonialism and neo-colonialism.  From Ghana and Algeria to India and Cuba, the Global South sought to liberate itself from centuries of European theft and underdevelopment.  Much of the newly decolonized world rejected capitalism and recognized that an alliance with the United States necessitated joining the peripheries of its growing empire.  In response to this wave of resistance, the United States, which up until then had been a successful settler colonial power but a relatively weak imperial one, embraced the Truman Doctrine and engaged in hybrid warfare with nations that rejected U.S. imperialism or embraced socialism.  Since the 1940s, a series of coups d’états, assassinations, bombing campaigns and wars ultimately weakened the anti-imperialist bloc and destroyed the progress made by socialist and anticolonial movements world-wide.

At the same time, the U.S. underwent a wave of urban rebellion and massive social resistance within its own borders.  The Black Liberation Movement won an end to de jure apartheid, indigenous peoples struggled to win their land back, and Asian and Latinx movements fought to end the expansion of U.S. power in their homelands.  Alongside these movements, an increasing number of white youth, inspired by the promise of decolonization around the world and people’s movements in the U.S., grew impatient with white supremacy, patriarchy and capitalism.  They organized against the Vietnam War, and in support of civil, economic and social rights for peoples oppressed on the basis of race, gender and sexuality.

Ultimately, although many hard-fought victories were won both at the global and domestic scales, the promise of anti-colonial socialism was defeated under the weight of U.S.-led hybrid warfare.  The United States’ primary objectives during the Cold War were: 1) To contain the international spread of socialism and 2) To engage in a war of attrition with the U.S.S.R., weakening it until it would fall.  It executed both objectives successfully.

After the fall of the U.S.S.R. and the ensuing absence of its military support, the United States faced little international resistance to its global expansion, invading Iraq and Eastern Europe, brokering the Oslo Accords and undermining Palestinian resistance, accelerating worldwide neoliberal restructuring, and criminalizing any form of resistance.  NATO bases sprang up in former Soviet republics, encircling Russia and reversing years of mutual nuclear deterrence.  U.S. military bases emerged throughout the world, and when a nation challenged U.S. power or interests it quickly faced bombing campaigns, sanctions or aid cuts.  Now, over one-third of the world is under economic sanctions, much of the Arab region and parts of Africa are mired in warfare, and Latin American leaders continue to be toppled through violent coups.  Even where U.S. troops and Special Forces are not directly engaged, U.S. weaponry and funding play critical roles.

The Geopolitical Significance of Iran

The history of Iran includes one of the most significant socialist movements in the world.  This movement is impressive not for its military prowess but for its grassroots organization.  Its long history includes the brief but noteworthy socialist secession of several regions in the early twentieth century, widespread labor protests that rocked the world’s access to oil and gas in the mid-twentieth century, and a revolution that, along with a multitude of other political forces, toppled the violent U.S.-backed dictatorship of Mohammad Reza Shah in 1979.  Rooted in internationalism, elements of the Iranian left have worked closely with the Palestinians, the South African anti-apartheid movement, the Black Liberation Movement in the United States, indigenous peoples in the United States, Third World feminist struggles, and many others over the long twentieth century.

Because of this robust internationalist, socialist ethos coupled with its geographic significance, Iran has been subject to European and later U.S. domination for over a century.  Oil was first discovered in Iran in 1908, and the Anglo-Persian Oil Company, now known as British Petroleum, started high-level production in 1913, with the British Royal Navy as its primary customer.  Iran only received a small portion of the profits.

During much of the twentieth century, Iran was governed by a brutal, British-backed monarchy, with only one brief respite.  Widely loved Prime Minister Mohammad Mossadegh took office in 1951 and nationalized Iranian oil shortly thereafter.  But in 1953, he was toppled through a violent coup organized by the CIA and the British MI6 under the name Operation Ajax.  The monarchy of Mohammad Reza Shah, favored by the United States, was reinstalled, brutally repressed the anti-colonial socialist movement and Mossadegh supporters, and returned partial control of Iranian oil to foreign powers.  The Pahlavi monarchy created the Savak, a secret policing and intelligence organization, with the help of the Americans and later the Israelis, in order to consolidate its repressive apparatus and more effectively execute the anti-socialist agenda.  During this time period, life in Iran became increasingly unbearable for the poor, working and even middle classes who lacked sufficient access to food, jobs and education.  By the time of the 1979 Iranian Revolution that definitively toppled the monarchy, the people of Iran had had enough.

Since the Revolution, Iran continues to be one of the many sites of U.S. hybrid warfare. The people of Iran have survived under a U.S. blockade for over four decades, followed by sanctions that have severely weakened the economy.  Cyber warfare and assassinations of Iranian scientists have been ongoing for over a decade.  Most recently, Iran has experienced over twenty unattributed explosions, destroying hospitals and other critical infrastructure.  The United States, fearful of the consequences of another ground war in the region, is working closely with Israel and reactionary monarchies in the Gulf to undermine Iranian sovereignty from within.

Those who suffer the most are the Iranian people.  It is for these historical and geopolitical reasons that the struggle to end sanctions on Iran and prevent a war is central to the anti-imperialist cause.

Which Side Are You On?

The age of anti-imperialism has arrived again. The same nations and peoples that successfully defeated European colonialism have now risen up against the continuation of U.S. military and economic warfare, coups d’états, sanctions and the expansion of military bases.  It is time for the U.S. left to do the same.  No one is more responsible for the spread of U.S. war than those residing here.  All people of conscience must stand with the peoples of the world as they seek justice, sovereign independence and peace.

But many U.S. social movements that purport to support anti-imperialism have two primary, interdependent problems, one of race and one of class.  First, they view the world through a white supremacist hermeneutic.  Calls for anti-imperialism are always rebuked with criticism of imperialism’s greatest victims – Venezuela’s Maduro is corrupt, Bolivia’s Morales is incompetent, Cuba’s Castro was anti-Black, Iran’s Islamic Republic is autocratic, Zimbabwe’s Mugabe was an anti-white dictator, the Palestinians refuse to compromise, the Iraqis are sectarian, the Afghans are tribal, the Ugandans are homophobic, etc.  Each of these critiques is an example of vulgar reductionism undergirded by racial tropes.  In effect, the white supremacy governing the United States has come to govern the worldview of these movements as well.

The second problem is that the majority of the educated and professionals in the United States benefit from the spoils of imperialism and settler colonialism.  The access to food, land and natural resources used to power daily life in the U.S. is a direct benefit of empire.  The think tank jobs, NGO gigs and foundation funding given to those who echo the State Department’s propaganda about Third World dictators are an indirect spoil of empire.

These two problems are foundational and run so deep that Americans, even the most enlightened among them, are often unable to imagine a decolonized land governed by indigenous nations or an international order without U.S. imperialism serving as the top cop.  Even so-called leftists routinely say that the socialist experiment failed.  This analysis obfuscates the destruction of the socialist promise by U.S. capitalism and hybrid warfare.  Socialism and anti-colonialism were never allowed to survive, let alone thrive.  They were always in battle with their greatest opponent, U.S. capitalism and white supremacy.

The litany of common proclamations by the fake left includes calls for more nuance and less binary thinking.  Why? Because, allegedly, there is space for creativity and innovation between the purported false binary of imperialism and anti-imperialism.  Because they believe the United States is not the only imperial power and anti-imperialism is uniquely represented by Stalin.  But such thinking lacks an educated perspective of world history and seeks to find a common ground between two irreconcilable historical forces.  As long as colonialism or imperialism continue, the peoples of the global south and the colonized north have no sovereignty over their lives, land or resources. The distorted historical view which maintains that even imperialism and human suffering are relative parrots both State Department propaganda and the human rights industrial complex.  The practical implication of this worldview is that a modicum of civil or human rights is far more important than national sovereignty, the redistribution of land, wealth and resources.

Combined, the race problem and the class problem have confused many social movements into believing that imperialism, without equivocations and qualifications, reinforces rather than undermines liberation in the tricontinental world.  And so, economic blockades are offered as a softer alternative to military invasion.

We founded the Committee of Anti-Imperialists in Solidarity with Iran (CASI) in order to provide clarity of analysis and action in opposing all forms of racist imperialist practices, whether exercised through war and destruction or economic sanctions and slow suffocation.  Join us in the struggle to end U.S. imperialism now.